It is often difficult to conclusively identify which variant N-1 is in a photograph, this guide will help you do that.

Before we start though, there is a very important fact to remember.

THERE IS NO GREEN ANYWHERE ON THE HULL OF ANY N-1 ROCKET!

I don’t know exactly where this started - but a mix of poor quality film and inaccurate museum models have spread the myth that the dark areas were green. The only green soviet rockets were military missiles, and even then, only the ones that were deployed in areas with lush vegetation. And Baikonur is a desert area.

The first N-1, the N1-3L is generally easy to identify, because the hull of the first and second stages is a dark grey colour, all the way around, and the 3rd stage is 50% grey, 50% white, with the white section on the top on the transporter, and towards the gantry / launch tower.

The N1-3L was also launched with no heat shield on the base of the first stage. (But note that factory shots may show the base before the heat shield was attached.)

In the factory it is shown with a large block of telemetry equipment at the top of the Stage 1 / Block A skirt.

Also note that the tops of the fuel tanks, visible through the interstage, are dark grey like the hull. The grid fins are black, in a light grey frame. 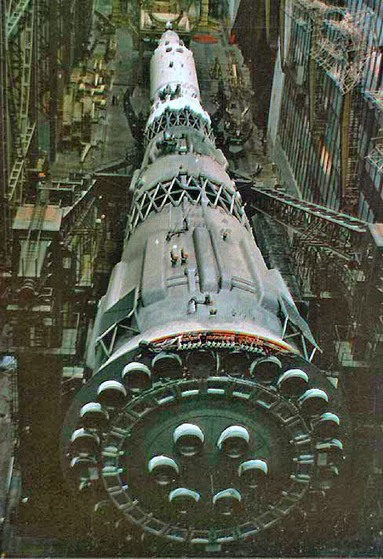 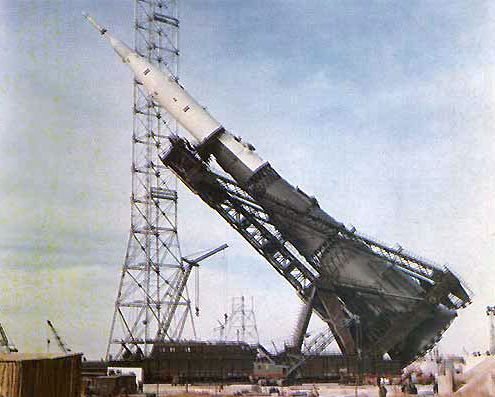 N1-3L being erected on the pad.

N1-3L in the snow, being delivered to the launch point.

N1-3L in the factory. Note the telemetry equipment on top at the rear.

The second N-1, the N1-5L is very similar in shape to the 3L. The 3rd stage / Block V hull is now completely white. The first two stages / blocks are mostly white, but with the 90 degrees towards the top dark grey. Note that the border between the dark and light sections runs directly through the centre line of the grid fins. This side of the hull is turned towards the gantry when the rocket is on the pad, so it can be difficult to spot, making the rocket appear 100% white. Careful examination of the edge towards the tower will generally show a darker region.

The N1-5L had a heat shield added to the base of the first stage – it is a very light or white colour, with a distinctive pattern of black dots. 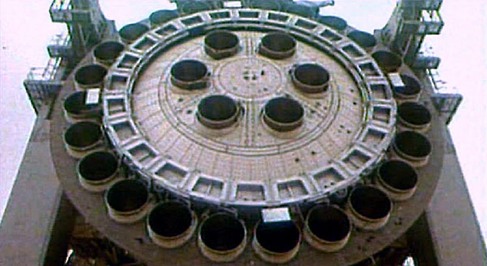 The distinctive heat shield on the base of the N1-5L, shown as it is transported towards the pad. 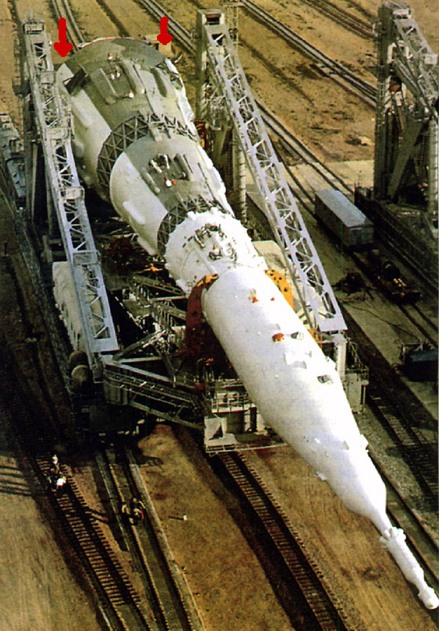 N1-5L, on the ‘grasshopper’ transporter. Note the way the border between light and dark areas runs under the centre of the grid fins.

This was the full size “model” used to test the pad facilities. It is best seen in some of the more famous photos of two N1’s on the pads, one is the 5L and one is the 1M. The model was used for other testing though, so there are  photos of it looking like other variants. Colour wise, (and in general), it looked like whichever model was being prepared for flight. It is sometimes called the 'weight model' or the 'breadboard model'.

The good news is that this variant is very easy to spot, as it has no escape system on top of the rocket, just a short ‘stalk’.

There was also a heat shield added to the top of the first stage fuel tank, to protect it from the ignition of the second stage, which started up just before the first stage was finished, to keep the fuel settled. (This is why so many Soviet and Russian rockets have an open interstage. The Saturn V used a separate set of small motors called "ullage motors".

Again there are two heat shields, again the grid fins are black in a light grey frame.

The third N1 to launch is easily confused with the second, and at first glance it looks the same.

Again the hull is mainly white but with a darker sector – but this time the dark sector is 120 degrees wide, not 90. Look to see if the border between light and dark sections runs directly through the centre line of the grid fins – if it does not, it’s the 6L.

Again the darker section is towards the gantry, making it hard to see from some angles.

The main visible structural difference is on the first stage. The fuel line covers are different, being cut off and mostly open at the bottom. An oblong structure is inserted up here, with a distinct gap around the edge. This is a fire extinguisher system.

Again there are two heat shields, again the grid fins are black in a grey frame. 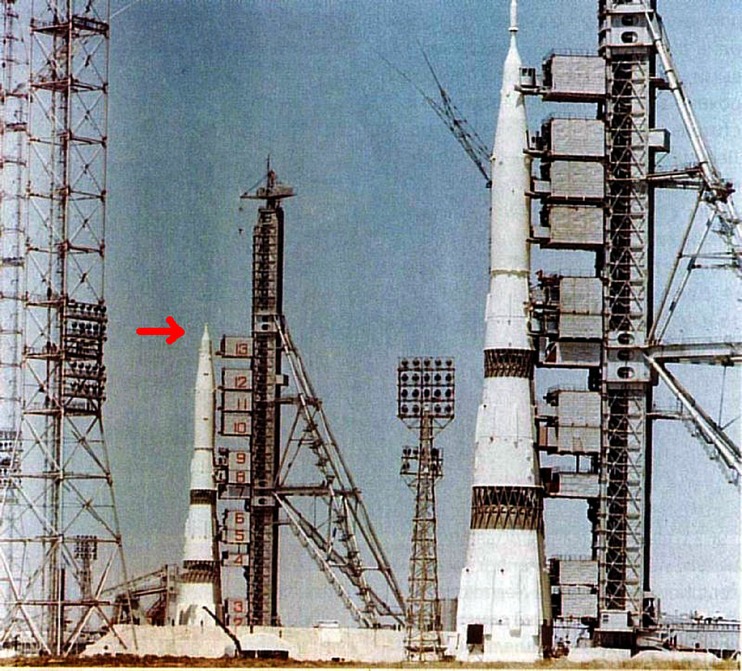 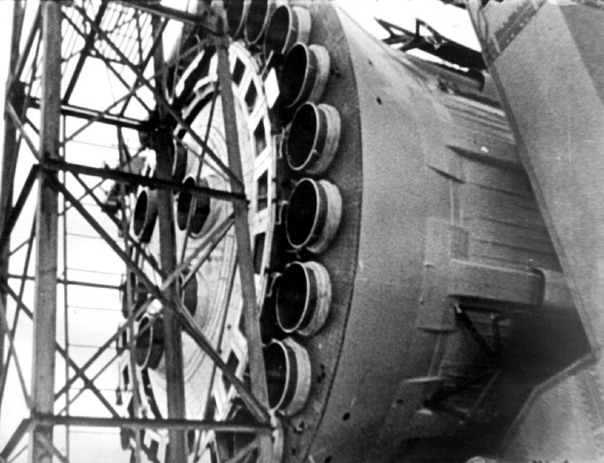 Base of the N1-6L, clearly showing the fire extinguisher system.

The final flight version of the N1 has some major structural differences, reflecting the large amount of work done to improve performance and reliability.

The hull is 100% white. (The move towards white hulls was to help with temperature control).

The fire extinguisher system is not visible, and the fuel line covers are now closer to the hull, and streamlined.  They are noticeably pointy at the top, on all the first three stages / blocks. This is very obvious, and makes the 7L very easy to identify from any angle.

The lower skirt on the First Stage / Block A no longer flares out, but is narrower, and vertical. This is too improve the flow around the lower area.

There are two protruding lumps on the edge of where the telemetry block was connected, holding more compact telemetry devices.

The visible parts of the fuel tank are now painted white, and the grid fins are black in a white frame. As with all versions after the 3L, there is a heat shield on the base, and on the top of the first stage. 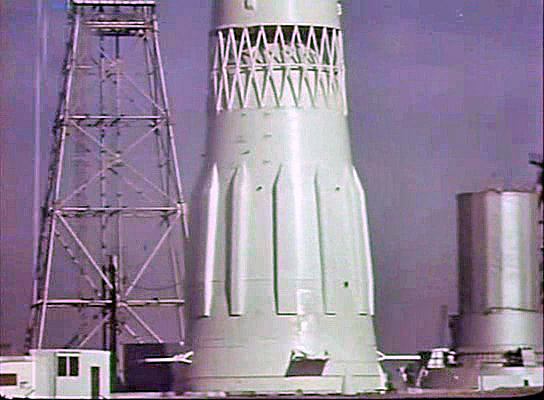 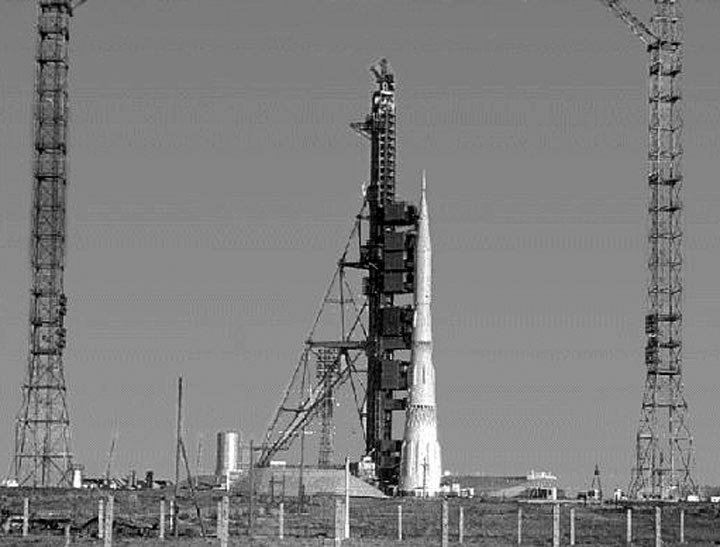 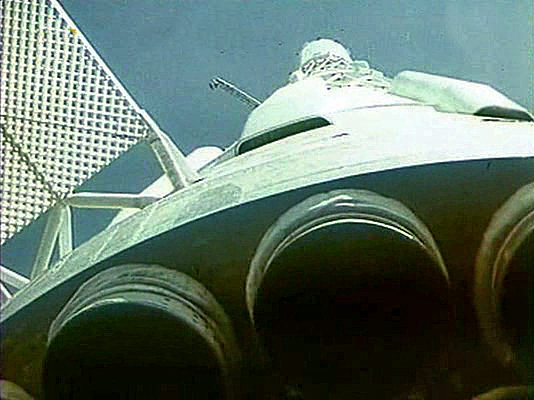 And this great shot from directly under the N1-7L clearly shows the straight base, lower profile fuel line covers, and white on white grid fins.